With a long tradition of openness to the world, served by a strategic positioning at the crossroads of major north-south axes and the development arc of Western Europe, Bordeaux has particularly favorable access conditions.

Since July 2, 2017, the new High Speed ??Line has put Paris at 2:04 from Bordeaux. 33 round trips are scheduled daily between the Bordeaux metropolis and the French capital. This arrival, associated with the construction of the lines of Bordeaux – Toulouse and Bordeaux – Bilbao, propels the city to the rank of crossroads of the south-west. 10 minutes from the historic center by tram, the station of Bordeaux Saint Jean, the largest railway station in the Aquitaine region, accommodates 260 trains per day including 25 return trips Bordeaux-Paris, 5 Bordeaux-Roissy Charles de Gaulle, 6 allers / Bordeaux-Lille returns, and 3 round trips Bordeaux-Strasbourg TGV.

Four highways lead to Bordeaux: the A10 from Paris and the regions of the West and North via Poitiers, Nantes, Orleans, the A62 from the Mediterranean via Toulouse, Montauban and Agen, the A63 from Spain via Bayonne and Dax, the A89 from the South East and East via Lyon, Clermont-Ferrand and Périgueux.

The great maritime port of Bordeaux is the second port of call for the Atlantic coast. Cruise ships and pleasure boats have the privilege of docking in the heart of the city, in the famous Port of the Moon, for short or extended stays. 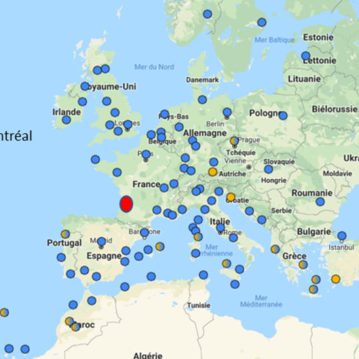